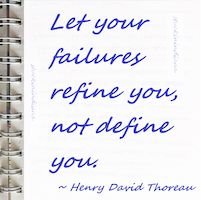 In a broken world failure is part of the fabric of life. Most of the time failure gets “a bad rap.” So, I would like to offer a corrective especially for those of us who, because of failures, beat ourselves up.

First, failure does not define you. One’s performance is NEVER one’s identity. Of the two criminals crucified with Jesus, one of them said:

“Remember me when You enter Your kingdom.” Jesus said to him, “I will.” (Luke 23:42-43) Relative to God’s design for living, the criminal had miserably failed. Yet, Jesus unconditionally loved him. He focused on his BEING, not his DOING. Joyce Meyers nails it! “We will all fail in life, but nobody has to be a failure. Failing at a thing doesn’t make you a failure.”

Second, though “we all miss the mark” (Romans 3:23), failure can be productive! As a matter of fact, it can be the road to success. Here are a few witnesses.

Note the theme. What we do with failure is more important than the failure itself. Paul had failed “big time.” I’ve hunted down and killed the followers of this Way. I have seized them and thrown them into prison. (Acts 22:4) After being captured by Jesus did he wallow in his failures? Did he beat himself up and kick himself down? Did he allow his “screw-ups to capture his mind and direct his life? Check this out! Brothers and sisters, I know that I still have a long way to go. But there is one thing I do: I forget what is in the past and try as hard as I can to reach the goal before me. (Philippians 3:12-14)