The Bucket List, starring Morgan Freeman and Jack Nicholson, is the story of two terminally ill men who escape from a cancer ward and head off on a road trip with a wish list of to-dos before they “kick the bucket”. If you haven’t seen the movie, do yourself a favor. It’s enormously funny! Most of all, it’s a great pleasure to watch two, seasoned actors who have fine-tuned their craft.

Jesus also had a “Bucket List”. “I have brought you glory by completing the work you gave me to do.“ (John 17:4)“  Jesus’ work was not self-initiated. He was responding to the will and work of the Father. “I came down from heaven to do what God wants, NOT what I want.” (John 6:38) One word describes that which was in Jesus’ “Bucket”: MISSION!

Prior to exiting the earthly stage, Jesus gave the eleven a bucket list of sorts. (Mind you, these were the last words to the disciples! Imagine all the things that Jesus COULD HAVE SAID!) The original Greek reads: “Going, Disciple, baptizing and teaching.” (Matthew 28:18-24) To clarify here’s an example: “Tune up the car; changing the oil, checking the plugs, replacing the distributor cap” Changing, checking, and replacing define “tune-up“!

These elements comprised Jesus’ marching orders to the Eleven, absolutely nothing other than “make disciples“!

NOW THINK! If we’re ruthlessly honest about current church life, Jesus’s command would be revised to something like this:

Now, some of you may doubt the revision. So, let me provide two pieces of evidence from the research. “When 1000 Christians were asked what most distinguished them as Christians, the overwhelming response was: ‘Going to church!'” (Barna Research) Second, follow the money!  “Only 0.1% of all Christian giving is directed toward mission efforts. North American and European Christians spend $12.5 trillion on themselves and their families each year.” (Barrett and Johnson, 2001, 656) 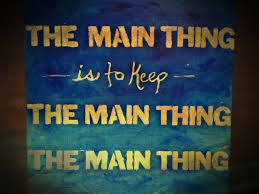 The Vineyard – Principles of Pruning

The Vineyard – Principles of Mutiplication