What marvelous love the Father has lavished upon us!
Just look at it—we’re called children of God!
That’s exactly who we are: children of God.
1 John 3:1-3

The Apostle’s Creed, confessed by most Christian Churches, begins with this statement: “I believe in God the Father.” This is what I attempted to establish in the first six posts. What Jesus reveals about God is this: He is FATHER!

Now, we need to explore this question:
When we say “father, what do we mean?

LOVE is the foundation of fathering! John tells us: “See what marvelous love the Father has extended to us. Just look at it – we’re called children of God.” 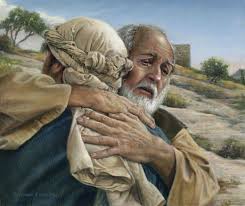 “Jesus went on to say, “There was once a man who had two sons. The younger one said to him, ‘Father, give me my share of the property now.’ So the man divided his property between his two sons. After a few days the younger son sold his part of the property and left home with the money. He went to a country far away, where he wasted his money in reckless living. He spent everything he had. At last he came to his senses and said, I will get up and go to my father and say, “Father, I have sinned against God and against you. So he got up and started back to his father. He was still a long way from home when his father saw him; his heart was filled with pity, and he ran, threw his arms around his son, and kissed him. ‘Father,’ the son said, ‘I have sinned against God and against you. I am no longer fit to be called your son.’ BUT THE FATHER … called to his servants. ‘Hurry!’ he said. ‘Bring the best robe and put it on him. Put a ring on his finger and shoes on his feet. Then go and get the prize calf and kill it, and let us celebrate with a feast!

Love is patient and kind.
Love cannot be made angry easily.
Love does not remember wrongs done against it.
Love is never happy when others do wrong.
Love never gives up on people.
It never stops trusting, never loses hope, and never quits.
1 Corinthians 13

LOVE is the foundation of fathering!

The Father’s Heart – beginning of provision