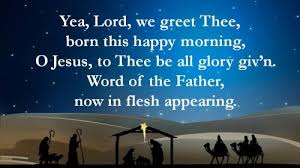 In the beginning was the Word,
and the Word was with God, and the Word was God.
The Word became flesh and dwelt among us,
and we saw His glory, the glory as the only Son of the Father.
John 1:1-2,14

One can know a person on three levels. First, you can read about a person. Such knowledge is extremely superficial. Second, you can meet a person … seeing her body, hearing her words and observing her actions. Better than a book, such observation is still limited. Finally, the person may reveal … little by little … the thoughts of her mind as well the movements of her heart. This is what’s called REVELATION. It’s completely dependent on the choice of the person to “let you in.” Obviously, revelation happens only by way of communication.

The Gospel of John doesn’t have a Christmas story like Matthew and Luke. However, from a different perspective John informs us as regards the meaning of Christmas. “THE WORD became flesh and blood, and moved into the neighborhood.” So we sing, “WORD of the Father, now in flesh appearing.“ At Christmas, the Word of the Father arrived to communicate His heart for YOU! In his letter John expanded the meaning of the event. “From the very first day, we were there, taking it all in—we heard it with our own ears, saw it with our own eyes, verified it with our own hands. The Word of Life appeared right before our eyes.  (1 John 1:1-2)

“What’s the word, man?” Have you ever spoken or heard this slang phrase?