Aaron shall take the two goats to the entrance of the Tent of the Lord’s presence. The goat chosen for Azazel shall be presented alive to the Lord. Aaron shall put both of his hands on the goat’s head, confess over it all the evils, sins, and rebellions of the people of Israel, and so transfer them to the goat’s head. Then the goat is to be driven off into the desert. The goat will carry all their sins away with him into some uninhabited land. (Leviticus 16)

The next day John saw Jesus coming toward him and said, “Look, the Lamb of God. He takes away the sins of the world!” (John 1:29)

It’s called the “Day of Atonement” or, in Hebrew “Yom Kippur.” It’s the most elevated day on the Jewish calendar … like Christmas and Easter on the Christian calendar. “Knee deep” is too deep; so, I’ll drastically simplify.

On Yom Kippur two goats were chosen by lot. The one that was kept alive was referred to as “the goat for Azazel” or the “scapegoat.” Note Aaron’s action relative to this goat: Having placed his hands on the goat’s head, Aaron “confessed all the evils, sins, and rebellions of the people of Israel, transferring all of it to the goat’s head.” 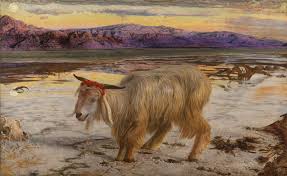 The next action is equally important: Weighted down with all of the “dis-eases” of the people, the goat is “driven off into the desert … some uninhabited land” never to be seen again. In other words “as far as the east is from the west—that’s how far He has removed our rebellious acts from Himself” (Psalm 103:12). WHO, in point of fact, is this Lamb? “Look, the Lamb of God. He takes away the sins of the world!” His name is JESUS!

We need to dig bit deeper—“The goat for Azazel carries all their sins into some inhabited land.” “Azazel” refers to none other than satan.

Hence, Jesus carries all of your sins to the place of Azazel; that is, Hell. In the presence of satan Jesus pays the price for your ransom: His blood. “It cost God plenty to get you out of that dead-end, empty-headed life you grew up in. He paid with Christ’s sacred blood. He died like an unblemished, sacrificial lamb” (1 Peter 1:17-21). Consequently, satan doesn’t have a leg to stand on relative to any and all of your sins and guilt. “Now there is no condemnation for those who belong to Christ Jesus” (Romans 8:1).

Finally, the early church fathers clearly understood the action of Jesus in fulfilling the Day of Atonement. Note the words of the Apostles’ Creed, finalized in the 4th century: “Jesus descended into hell.” Bearing our sins, He went to hell for us, paying the price for our freedom which satan rightly demanded. In other words, at the Cross Jesus not only paid our bail; he got us off “scot free”!