During that time the devil came and said to Jesus, “If You are the Son of God, tell these stones to become loaves of bread.” Jesus told him, “No! The Scriptures say, ‘People do not live by bread alone, but by every word that comes from the mouth of God.’” (Matthew 4:3-4)

It’s a perplexing phenomenon! On the one hand almost everyone (with the exception of psychopaths), whether religious or not, acknowledge the presence of evil in our world (as a matter of fact the existence of evil is one of the hallmarks of philosophical debate). On the other hand “a majority of Evangelicals believe that Satan is not a living being, but merely, at most, a symbol of evil or an impersonal force” (Teaching The Word Ministries). This disparity is problematic for many reasons, the chief of which is this fact: Jesus spoke to, taught about and did battle with Satan. Obviously, either He was a grossly deluded lunatic, or a majority of His followers in our time have been deceived. 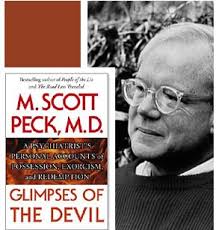 As for me I prefer to stand with Jesus for two reasons. First, I believe Jesus was not a deluded lunatic. The Word of the Father that became flesh related to a spirit being whose name was Lucifer, Satan, the Devil. That’s a fact of Revelation! Second, as Jesus and the disciples, I too have ministered deliverance to those in bondage to the Evil One. Such experiences “closed the case” for me as they did for noted psychiatrist M. Scott Peck, whose last book is entitled Glimpses of the Devil: A Psychiatrist’s Personal Accounts of Possession, Exorcism, and Redemption.

“Until the day Dr. Peck first met the young woman called Jersey, he did not believe in the devil. In fact, as a mature, highly experienced psychiatrist, he expected that this case would resolve his ongoing effort to prove to himself, as scientifically as possible, that there were absolutely no grounds for such beliefs. Yet what he discovered could not be explained away simply as madness or by any standard clinical diagnosis. Through a series of unanticipated events, Dr. Peck found himself thrust into the role of exorcist, and his desire to treat and help Jersey led him down a path of blurred boundaries between science and religion. Once there, he came face-to-face with deeply entrenched evil and ultimately witnessed the overwhelming healing power of love.”

For those of you that may be “on the fence” about the reality of Satan I offer this video testimony of John Ramirez, an ex-Satanist. John tells the story of how he was trained to be a satanic cult (Santeria and Spiritualist) high ranking priest in New York City—casting powerful witchcraft spells and controlling entire regions. Raised in an impoverished ghetto neighborhood, he grew up despising his father for his careless disregard of his family. John learned to survive the cold, harsh streets of the South Bronx. Looking for love and validation, he eventually found it in a new “family” of witches and warlocks who groomed him to become a high priest in their occult religion. His plunge into the dark side reached a boiling point on the night he sold his soul to the devil in a diabolical, blood-soaked ritual. With renewed fervor—and the mark of the beast now cut into his right arm—he actively recruited souls into this “unholy kingdom,” haunting the bars and clubs of NYC by night to find his next victims. John’s life continued on this dark path until God intervened through a miraculous, larger-than-life dream, revealing Himself for who He really is and literally snatching John back from the grips of hell. Subsequently, John joined Times Square Church and was discipled by Bill Wilkerson.

Monster of Life – The Enemy of Jesus