They sewed fig leaves together and made clothes for themselves.
Then the Lord God called to the man, “Where are you?”
He replied, “I heard you walking in the garden, so I hid.
I was afraid because I was naked.”
Genesis 3:7-10

Adam and Eve defied The Law of Human-Being-Ness: LOVE! Representing the family of mankind,  they passed on … “genetically” … so to speak … a DIS-EASED existence. The Teacher says: Meaningless, Absurd, Enigmatic, Transient. Everything is useless … Completely useless! (Ecclesiastes 1)

Every disease has symptoms! FEAR is THE SYMPTOM of the DIS-EASED!

When Adam and Eve pulled the plug from God, they were sucked into a black hole … a black hole is a region of spacetime exhibiting gravitational acceleration so strong that nothing can escape from it. Wikipedia “Black Hole”  … completely “OUT-OF-CONTROL!”

This is the DNA of our existence. All behavior is fundamentally rooted in the irresistible drive to mask (“a manner that hides one’s true character”). “Hiding becomes universal.” (John Ortberg) “As the best observers of human nature know well, people are not as they appear. Well-constructed masks obscure fatal flaws and parts of self that are often massively discordant with appearances.” (Dr. David Benner)

“When I get honest, I admit I am a bundle of paradoxes. I believe and I doubt, I hope and get discouraged, I love and I hate, I feel bad about feeling good, I feel guilty about not feeling guilty. I am trusting and suspicious. I am honest and I still play games.” (The Ragamuffin Gospel, Brennan Manning)

You’re hopeless, you religion scholars and Pharisees! Frauds! You burnish the surface of your cups and bowls so they sparkle in the sun, while the insides are maggoty. Stupid Pharisees!  You’re like manicured grave plots, grass clipped and the flowers bright, but six feet down it’s all rotting bones and worm-eaten flesh. People look at you and think you’re saints, but beneath the skin you’re total frauds. (Matthew 23:26-28) 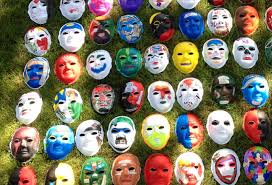 The Barrenness of our Times