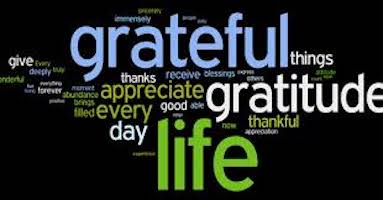 It happened that as Jesus made His way toward Jerusalem, He crossed over the border between Samaria and Galilee. As He entered a village, ten men, all lepers, met Him. They kept their distance but raised their voices, calling out, “Jesus, Master, have mercy on us!” Taking a good look at them, He said, “Go,

show yourselves to the priests.” They went, and while still on their way, became clean. One of them, when he realized that he was healed, turned around and came back, shouting his gratitude, glorifying God. He kneeled at Jesus’ feet, so grateful. He couldn’t thank him enough—and he was a Samaritan. Jesus said, “Were not ten healed? Where are the nine? Can none be found to come back and give glory to God except this outsider?” Then He said to him, “Get up. Go on your way. Your faith has healed and saved you.” (Luke 17:11-19)

“The one thing all humans have in common is that each of us wants to be happy,” says Brother David Steindl-Rast, a monk of Mount Saviour Benedictine monastery in New York, dividing his time between hermitic contemplation, writing and lecturing. Happiness, he suggests, is born from gratitude: “Gratefulness makes us aware of the gift and makes us happy. As long as we take things for granted they don’t make us happy. Gratefulness is the key to happiness. Practicing gratitude is so central to my spirituality.”

Mental Health – The Psychology of Self-Motivation